An information guide for Aboriginal and/or Torres Strait Islander families in the Ballarat area. 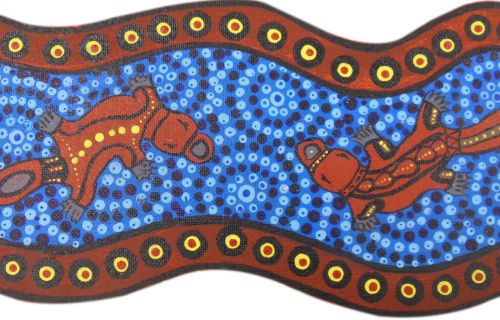 The Grampians Regional Aboriginal Justice Advisory Committee (RAJAC) together with the Koorie Engagement Action Group (KEAG) and the Local Aboriginal Network (LAN) has developed this guide for local Aboriginal and Torres Strait Islanders families with contact details and information on relevant resources in the Ballarat region, including:

All original artwork has been created by Auntie Diana Nikkelson.

We acknowledge the Wadawurrung people as the Traditional Custodians of the land and pay our respects to Elders both past and present.

We also acknowledge the families and individuals that descend from other communities and areas of Australia who are currently residing on the land of the Wadawurrung people.

The Aboriginal Flag was designed by Harold Thomas, a Luritja man from Central Australia. It was created as a symbol of unity and national identity for Aboriginal people during the land rights movement of the early 1970s. The flag was chosen as the official flag for the Aboriginal Tent Embassy and was first flown there in 1972.

In 1995, the Australian Government proclaimed the flag as an official Flag of Australia under Section 5 of the Flags Act 1953.

The symbolic meanings of the flag colours:

In July 1995, it was recognised by the Australian Government as an official Flag of Australia under the Flags Act 1953.

The symbolic meanings of the flag colours:

Department of Education and Training (DET)

Department of Health and Human Services

Community
Back to top