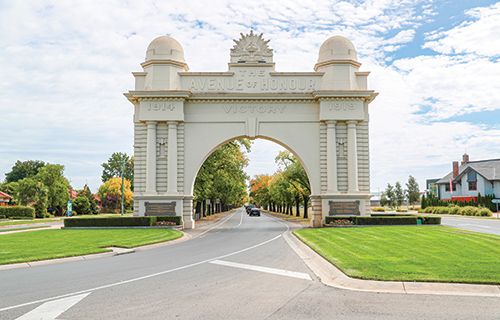 How ironic that the world was reeling from the effects of the global Spanish flu pandemic when his Royal Highness Prince Edward, the Prince of Wales, arrived in Ballarat to officially open Ballarat’s Arch of Victory on 2 June 1920.

One hundred years later, and a new pandemic known as COVID-19 will prevent a physical audience from marking the Arch centenary. However, it won’t prevent Ballarat from acknowledging the milestone of one of the City’s most significant structures and war memorials.

The City of Ballarat, together with the Arch of Victory / Avenue of Honour Committee, has created this special online commemoration as a mark of respect to its creators and the brave servicemen and women whose names are engraved along the Avenue of Honour.

Residents and visitors to Ballarat know the Arch of Victory for its grandeur, the impressive structure that most of us have driven through many times.

But did you know?

The Arch of Victory is the largest commemorative arch in Australia.

The Arch of Victory measures at an incredible 16.5m high and 19.2m wide, with the arch opening dimensions being 7.3m high and 9.5m wide.

It is the only Australian arch featured in an international display.

The world’s most significant arches are displayed at the Arc de Triomphe in Paris and Ballarat’s Arch of Victory has its place amongst those world arches.

The Arch of Victory was officially opened by royalty.

Prince Edward, Prince of Wales, opened the Arch of Victory and the Avenue of Honour on 2 June 1920.

The Arch marks the beginning of the Avenue of Honour.

The Avenue of Honour is Australia’s longest commemorative avenue of honour.

The memorial trees along the avenue are accompanied by a plaque each that carries the name of one of the 3,801 World War 1 service personnel who enlisted as residents of the then City of Ballaarat and Township of Ballarat East.

The Avenue of Honour and the Arch of Victory were made possible through the fundraising efforts of the Lucas Girls.

Fundraising activities undertaken by the Lucas Girls (as the women working at the local textile E. Lucas & Co. Pty. Ltd. were lovingly referred to) included clothing exhibitions, sale of souvenirs and a ladies’ football match in 1918.

Hard physical work was also no trouble for the Lucas Girls, who were involved in the planting of many of the trees in the Avenue of Honour and even helped loading bricks from the factory themselves onto carts for the construction of the Arch of Victory. 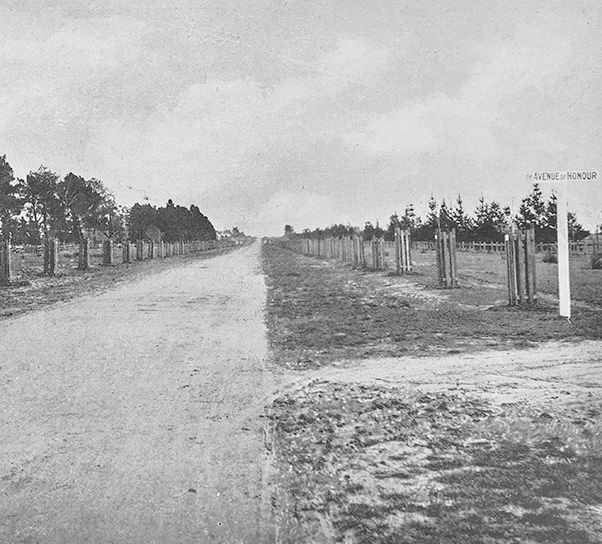 Avenue of Honour just after first planting of June 1917. 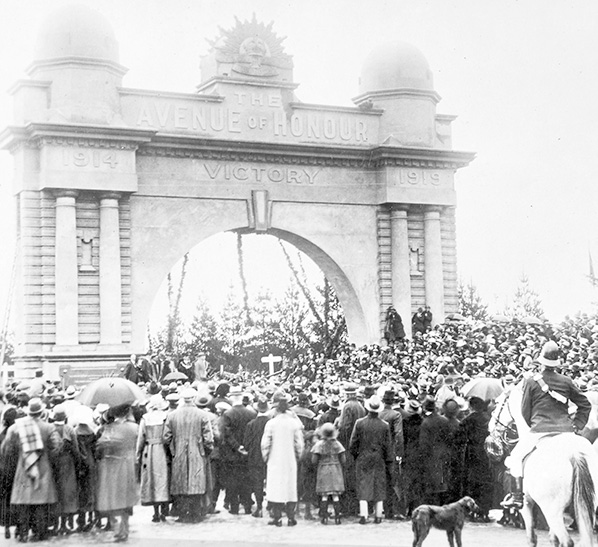 Crowd at the opening – streamers are evident in this view from the west. 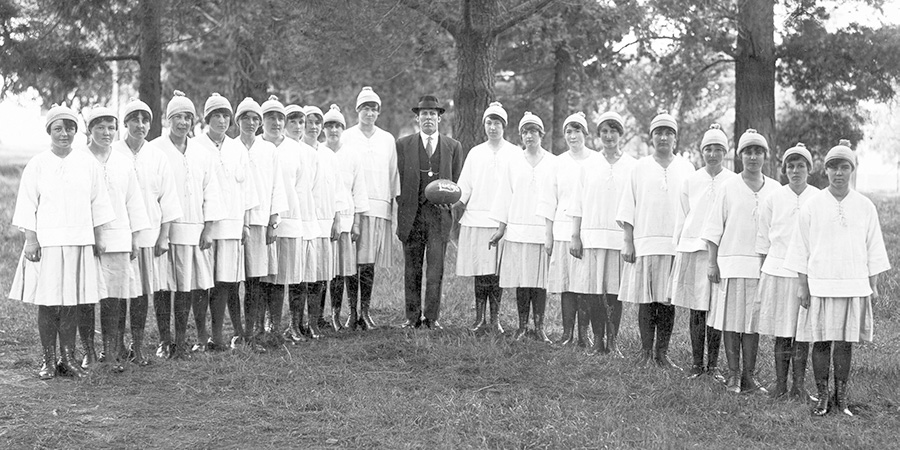 The Lucas Girls and coach Charlie Clymo ready for the 28 September 1918 football match.

100 years after its official opening in June 1920, the Arch of Victory still stands as one of Ballarat’s most iconic structures and the precinct is a focal location for Ballarat commemorations.

The Arch forms the gateway to the Avenue of Honour, Australia’s longest commemorative avenue of honour, honouring those who enlisted as well as commemorating the Allied Victory in the Great War.

These two projects were funded by female employees of the E. Lucas & Co. Pty. Ltd., who raised funds for the build of the Arch and the planting of the trees for the Avenue of Honour.

The Memorial Wall and Rotunda, adjacent to the Arch, list the names of the 3,801 servicemen and women (56 nurses) from the area who served in WW1 and are commemorated in our Avenue of Honour.

757 of these servicemen and two nurses lost their lives and are included on the Roll of Honour at the Australian War Memorial in Canberra. 303 of these service personnel have no known grave.

Amongst those who lost their lives were 53 sets of brothers and one father and son.

These numbers explain the creation of the Garden of the Grieving Mother adjacent the Arch.

The name ‘Arch of Victory’ is interpreted by some as an expression of imperialist triumph, but Committee President Garry Snowden thinks it can also be seen as offering some degree of comfort and consolation to a community emerging from four years of deep anxiety and grief; the hardships experienced were not in vain.

Plaques added to the Arch over time also commemorate subsequent service and sacrifice in WW2, Korea, Malaya, Borneo, Vietnam and in peace-keeping missions. 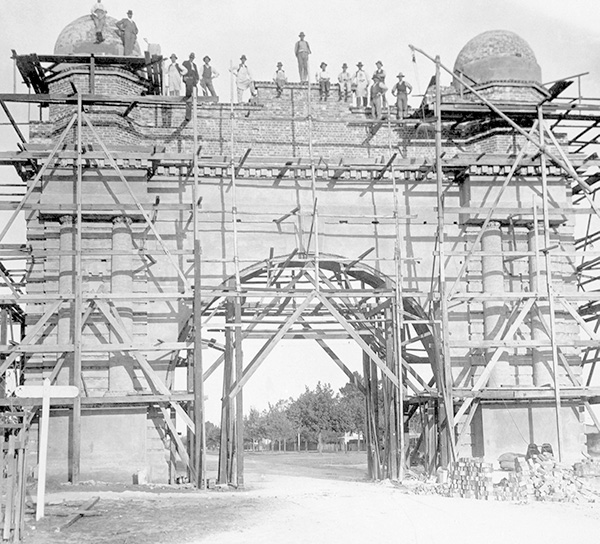 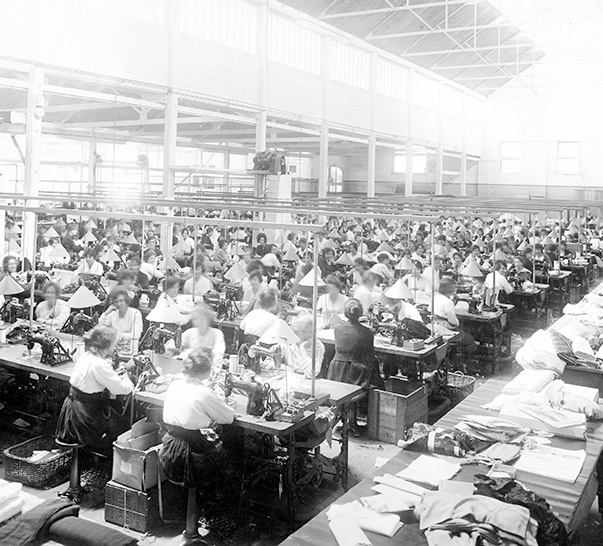 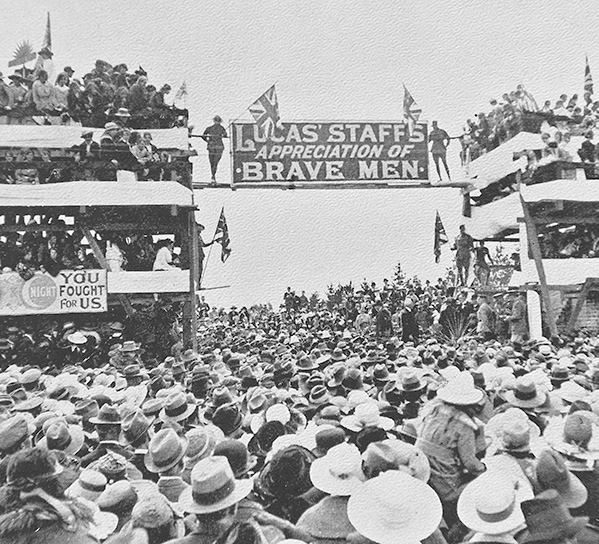 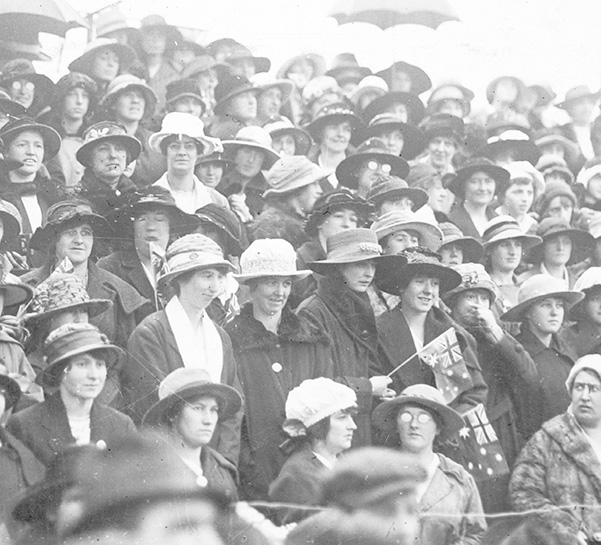 Lucas Girls awaiting HRH Prince of Wales at the Arch of Victory Opening on 2 June 1920. 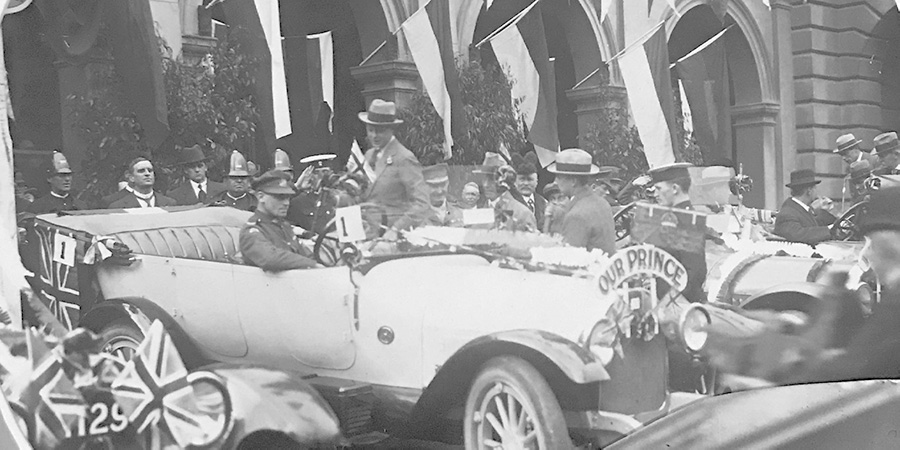 Prince Edward moving to his car for a tour of the streets of Ballarat. 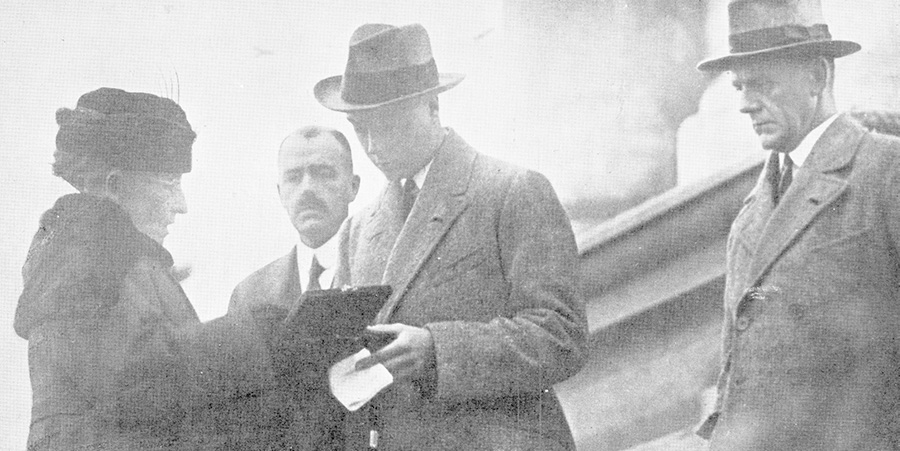 Mrs Lucas presenting HRH with pair of gold scissors – between them is Edward Price and to the right is Admiral Halsey. 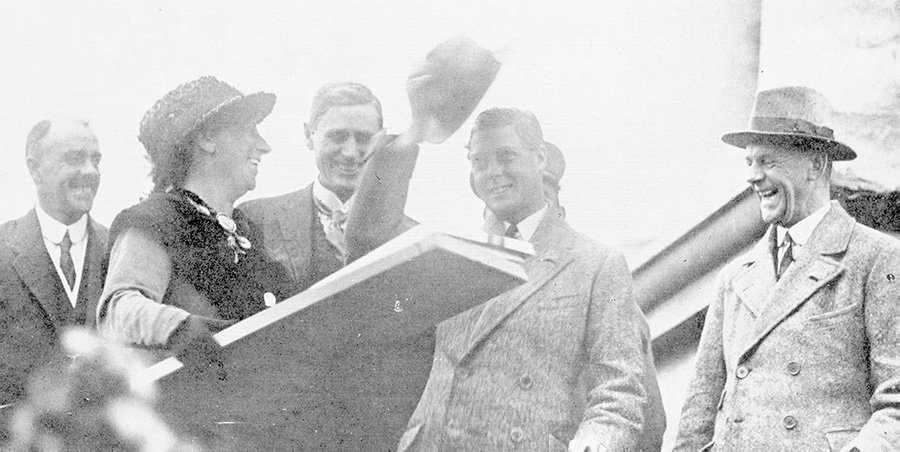 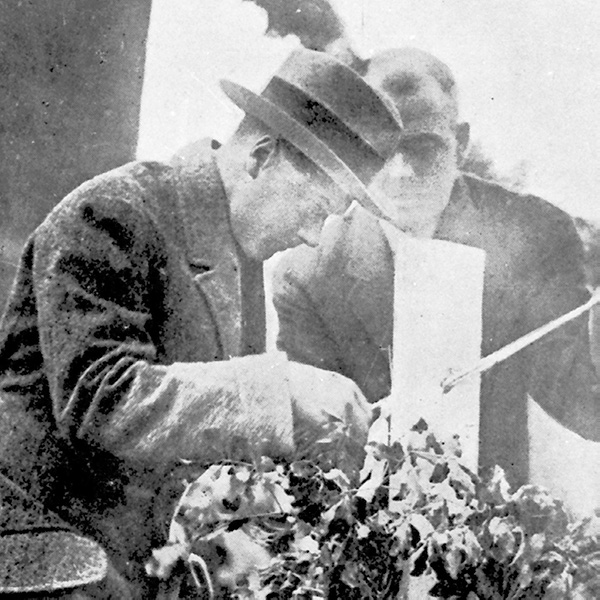 HRH cutting the ribbon to release the Barrier of Festoons.

The rich history of the Arch of Victory and the Avenue of Honour is recorded in the award-winning book “Avenue of Memories” written by local historian Phil Roberts and published in 2018. 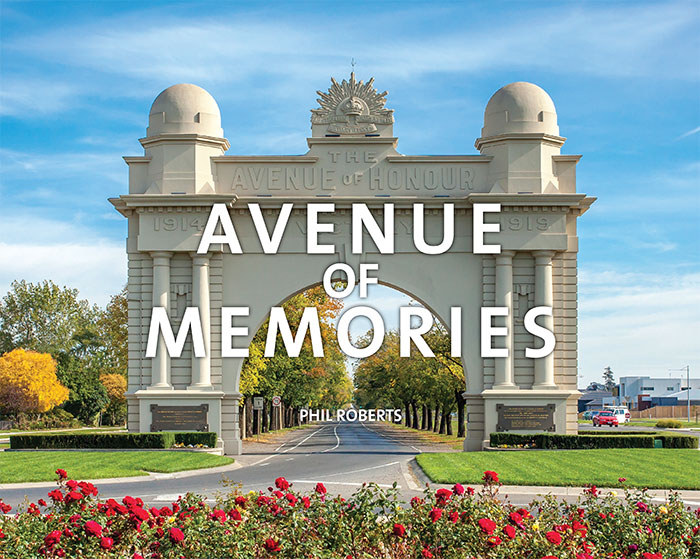 Visit Honouring Our Anzacs for more historic information on the Arch of Victory and the Avenue of Honour. This website was created to commemorate the Centenary of Anzac (2014-2018).

It hosts not only detailed information about the Arch of Victory and Avenue of Honour, as well as the Lucas Girls, but also about the stories behind the men and women commemorated at this site.

Each individual tree planted along the Avenue of Honour can be looked at on a digital map and specific information about the person in whose honour the tree was planted can be explored. 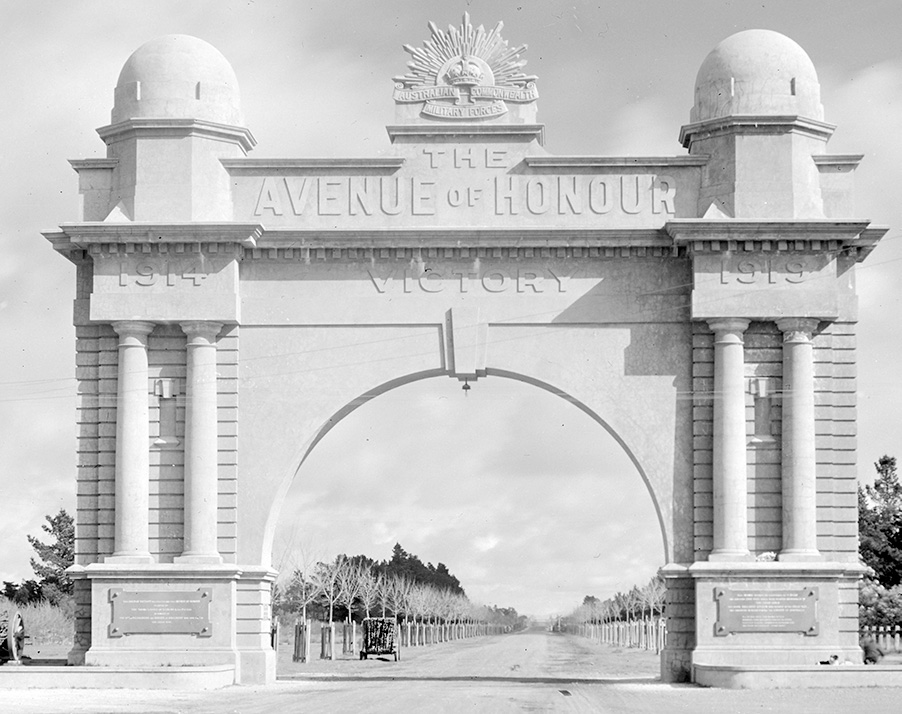 All images shown above are credited to the book “Avenue of Memories” by Phil Roberts. For detailed information, please refer to page 245 in the book.

When the proactive workers at the textile company E. Lucas & Co. Pty. Ltd. (affectionately known as the ‘Lucas Girls’) initiated a tree planting project to honour the men and women who served in the war, they made Ballarat one of the earliest communities in Victoria to create an Avenue of Honour. At a similar time, a unique memorial band was being formed in Ballarat for the same purpose, the Ballarat and District Soldiers’ and Sailors' Memorial Band. Both significant living memorials were initiated during World War I and live on today.

A highlight in the band’s early history was playing at the laying of the foundation stone for the Arch of Victory by General Sir William Birdwood on 7 February 1920.

The band also played at the official opening of the Arch by the Prince of Wales in the same year.

'When Edward, Prince of Wales visited Ballarat to open the Arch on 2 June, the band formed at the Ballarat Railway Station and marched ahead of the guard of honour and returned servicemen as the Prince was escorted to the Ballarat RSL.'

2020 marks the joint centenary of the completion of the Arch of Victory and the formalisation of the Ballarat and District Soldiers and Sailors' Memorial Band.

To read the full story about the band’s history and how it ultimately interweaves with Ballarat’s history, head to the below link to read the newly launched eBook Ballarat Memorial Concert Band: a century of music by Georgina Williams. 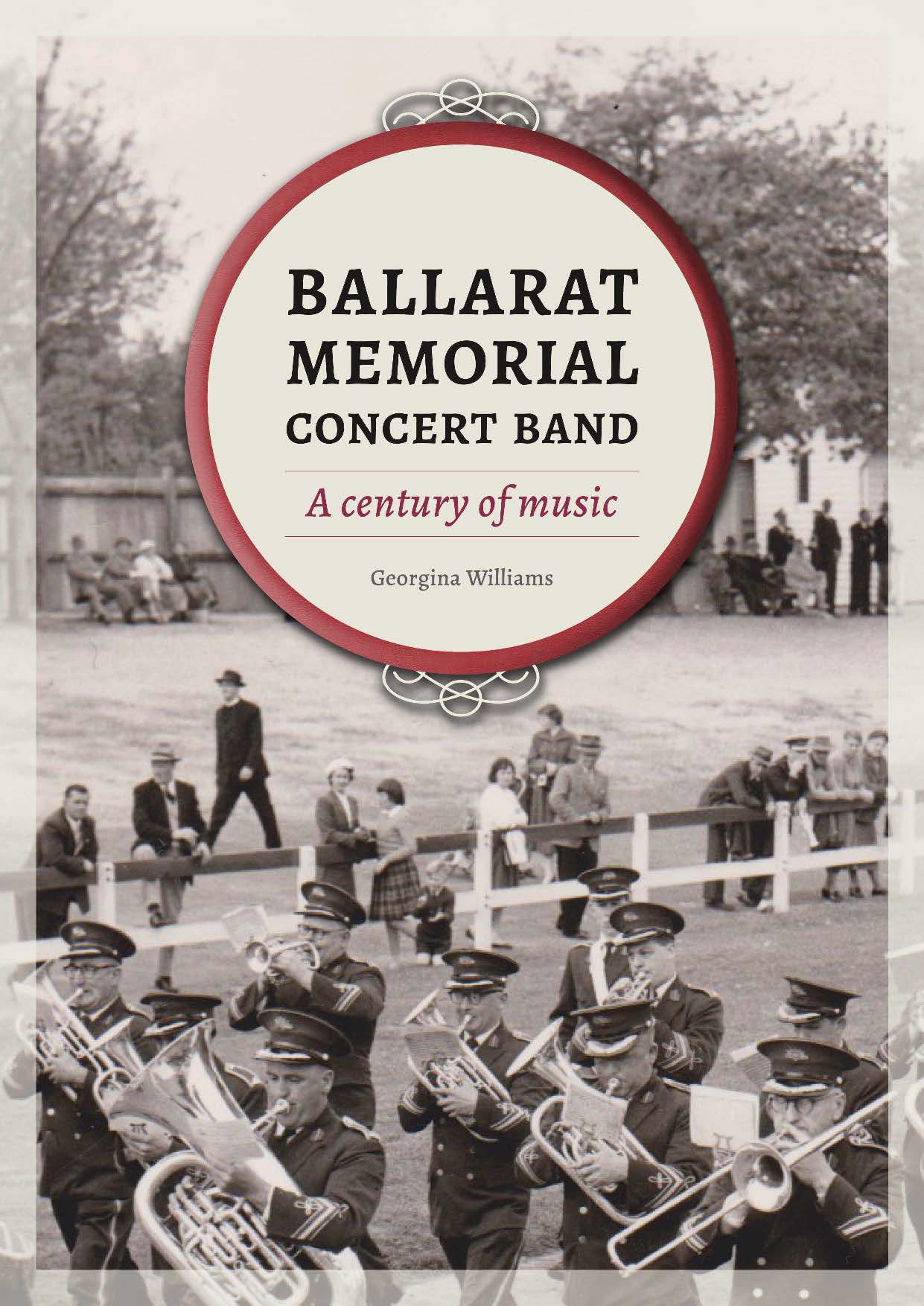