When the redevelopment of 200 Victoria Street is finally complete, the stories and experiences of its former residents, including members of the Stolen Generations, will come back into focus. The City of Ballarat is working with a small group of former residents to acknowledge the past. 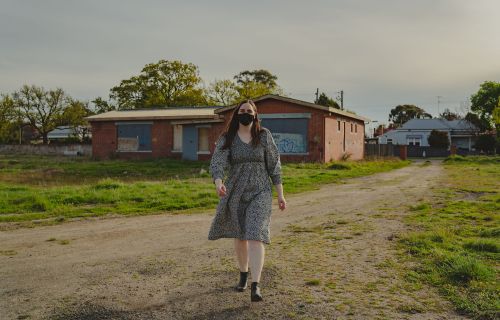 Since opening as an institution in 1866, the Victoria Street site was at different times known as the Ballarat District Orphan Asylum, Ballarat Orphanage and Ballarat Children’s Home until its closure in 1983. It then entered a new era as St Paul’s College and then Damascus College, before being purchased by developers in 2011.

Remembering more than 4,000 children who passed through its doors has been a massive project for a small but dedicated working party, comprising of City of Ballarat Project Manager Catherine McLay, former residents Frank Golding, Deb Findlay and Phyllis Cremona, as well as Vicki Peart, Stolen Generations Officer from the Ballarat and District Aboriginal Cooperative, whose family members were once also residents.

“We support their vision to share real experiences,” Catherine says of the mixed-use development.

Deb, a resident of the Ballarat Children’s Home between 1969 and 1981, says it’s been a privilege to be part of the heritage interpretation.

“We are doing something special that, once finished, I hope the former residents embrace as a way to heal and to hopefully move forward. Redeveloping the site is all about the children and their experiences.” Frank agrees. “It’s important that survivors’ voices are heard and our experiences remembered.”

Heritage interpretation was negotiated during the planning permit process as a fundamental part of how the site, and those with a connection to it, would be acknowledged. What remains of the once expansive institution includes the former schoolhouse building, which will be incorporated into a supermarket, the former toddlers’ block, which will become a kindergarten, the historic wall along Stawell Street that will undergo restoration, as well as several historic elm and magnolia trees, which will form part of public reserves.

“Storytelling will not shy away from the truth but will be layered so that visitors can choose how deep they wish to dive in and understand,” Catherine says.

“We want to use former residents’ own words to bring their experiences to life rather than making this about the institution and its buildings.”

One of the design elements — inspired by one of the children’s favourite games — includes clusters of oversized marbles. Made from various materials, they're scattered around the site and fixed, for children to play on and discover embedded words and images.

Catherine says one of the key materials being used is stone sourced from all different parts of Victoria to represent how children came to the site from many places.

“It is very important to us that everything about the design is inspired by the former residents and their stories, because they are so powerful.”

Of the two public reserves, the larger will also include a diagonal main footpath with a rose arbour at either end, featuring interpretation panels lining the underside of each of the arches.

“The children had to tend the rose garden but weren’t allowed to play in it, so this was their way of reclaiming the roses.”

The larger reserve will also house a playground, play equipment and a shelter, where former residents, new residents and their families can get together.

“We will use existing surfaces – planter beds, seats, footpaths – and have something embedded in them as an opportunity to tell more of the story in an integrated way using symbols, images and words,” Catherine says.

Next on the agenda for the working party is to secure external funding to deliver the interpretation, topping up funds already committed by the City of Ballarat, developer contributions and public donations.

The projects, initiatives, and ideas in this article align with the following goals of the City of Ballarat Council Plan 2021-2025: